If I were at the top of the elite ruling class and I knew for certain that a civilization ending catastrophe like a pole shift or an asteroid impact was coming on a certain date in the near future, I would make sure some small remnant of humanity would survive – stocking numerous bunkers and arks with the technology and supplies required to ensure that civilization doesn’t have to start over from a new stone-age.  I would populate the prepared locations with friends, family, and plenty of smart young people with the skills to rebuild and the fertility to repopulate.  The cream of the crop – the best of the best – would be the seeds of the population of the next new world.

But beyond family and friends and all the scientists and doctors and engineers and craftsmen and other very necessary workers and breeders, the rest of us – the other 99.9% of the world – will not be receiving invitations – to the elite’s farewell party.  We could hope, at least, that they would explain the situation and give the rest of us a warning and some ideas for preparation and increasing our chances of survival on this side of the bunker doors….  But I don’t think they want the rest of us to survive.  I think they aim to control the next world without all the useless eaters in the way.

The problem is that some small portion of humanity will survive outside their bunkers.  It may be far less than one tenth of 1% of the almost eight billion people people on Earth today, but if even one in a thousand of us survives, that would still be almost eight million people capable of competing with them in the aftermath.  And those millions of battle-hardened survivors, who overcame natural disasters, diseases, food shortages, and all the other desperate souls fighting for scraps in the aftermath – they would all be very angry that those who fled into bunkers beforehand didn’t warn them about what was coming.

It would be far safer for the elite to make sure such competition would not be around to seek revenge as bunker doors reopen after the pole shift [or any other world-age-ending catastrophe.]  They don’t want to experience the world of “Mad Max” or “The Road” – they want something more like “Tomorrowland” – and to have that, they might aim for depopulation before the main event.  One method would be to spread disease and infertility throughout the population.

With that in mind, consider this article’s ideas (mostly from Brandon Smith’s article and then another article with more commentary on it)Protection Against Toxic EMF Damage – Smart Meter Covers More to read

New Prices Of Flats And Homes Near Morley Might Shock You!Looking For An Organic Meal Delivery? Check Options In MorleyWant To Make Your Own App? Find An Easy Step-By-Step GuideFind Out How To Create Your Family Tree Online, Easy & Free!BEFORE IT’S NEWS ON TELEGRAM * GET THE TELEGRAM APP – https://telegram.org

“…There has been a sudden deluge of covid vaccination propaganda and vaccine passport propaganda in the past month, more so than I think we have seen since the beginning of this year. I am speaking of the US in particular, but it is important to point out that in the US the establishment is still desperately clamoring for a much higher vaccination rate. In places like Europe, the UK and Australia vaccinations rates are higher and governments have moved on to the vaccine passport phase of their agenda.

Some people may be confused by the obvious lockstep that most nations are moving in as far as covid mandates and restrictions are concerned. How is it possible that almost all the governments on the planet are in agreement on medical totalitarianism? Well, it’s rather easy to understand when you realize the majority of them are linked together through globalist institutions like the World Economic Forum, which has repeatedly called the pandemic a “perfect opportunity” to push through their plans for a “Great Reset”.

The “Great Reset” is a long-term ideological usurpation of what’s left of individual freedom and free-market economies, and its goal is the imposition of a global socialist/communist dictatorship. Globalists wrap these objectives in pretty-sounding words and humanitarian sounding aspirations, but at the bottom, the “Reset” is about an end to liberty as we know it….

But how to achieve such a goal?

Well, interestingly enough the WEF and the Bill And Melinda Gates Foundation described exactly how they planned to do it during a “simulation” they held in October of 2019 called “Event 201”. During the event, they imagined a massive coronavirus pandemic, spread supposedly from animals to humans, which would facilitate the need for pervasive restrictions on individual liberties, national economies as well as the internet and social media. I’m sure it’s all a coincidence, but the exact same scenario the globalists at the WEF played out during Event 201 happened in the real world only two months later….This is the Organic Biotin That Gives Beautiful Hair, Strong Nails and an Amazing Complexion! More to Read

Dream Of Owning Your Own Flat? These Options Make It A RealityWork With Amazon From Home And Earn €1,500 Per Month. Find HowMorley Single Mom Earns £853/Hour Via A Simple Amazon InvestmentThis Video Will Soon Be Banned. Watch Before It’s DeletedSHOCKING! Scientist Reveals The Real Cause Of Weight Gain! See Video

Biden and the CDC are inflating their vaccination numbers to create the illusion that a larger majority of Americans support the jab. And if this is the case, it explains why Biden, Fauci, and the mainstream media are force-feeding the public with pro-vaccine hype that consistently contradicts real science. They are not getting the fear and public compliance that they had hoped for.

But why do they want 100% vaccination? Why are they so desperate for every single person in the world to get the mRNA jab? After all, the average (IFR) death rate of covid is a mere 0.26% of those infected (this is a stat that the media consistently and deliberately refuses to mention to the public). This means that 99.74% of the public is in NO danger from covid whether they are vaccinated or not.

What if the vaccines are a pivotal part of their “Great Reset?”

The infertility question in particular is drawing the most fire from the establishment, and I would point out a particularly insidious narrative being implanted in the media. Whenever people question the chance of sterility caused by the vaccines, bureaucrats, and media talking heads go on the attack, and then say “There’s no evidence that the vaccines cause infertility, but Covid-19 might cause it…”

We can trust the WHO and CDC today, even though their predecessors did things like inject men with syphilis without their knowledge or consent in the Tuskegee experiment… right?  When we’re offered up to $1000 to encourage us to get vaccinated, that’s because they have our best interests at heart and want to protect us, right?

No reason not to trust the government to protect us, right?

“…The stage is being set, in my [Brandon Smith’s] view, for a mass infertility event, and covid will be blamed in place of the experimental vaccines. This is why the establishment needs a 100% vaccination rate; unvaccinated people would stand as evidence of their crime. Let me explain…Tiny Self Defense Tool Drops a 270 Thug In 2 Seconds Flat – Get Yours While Supplies Last

My concern is that Klaus Schwab’s reset agenda is impossible to enforce in a permanent way unless the human population is greatly reduced over a short period of time (a generation or two). Globalists are constantly talking about population control and reduction.” 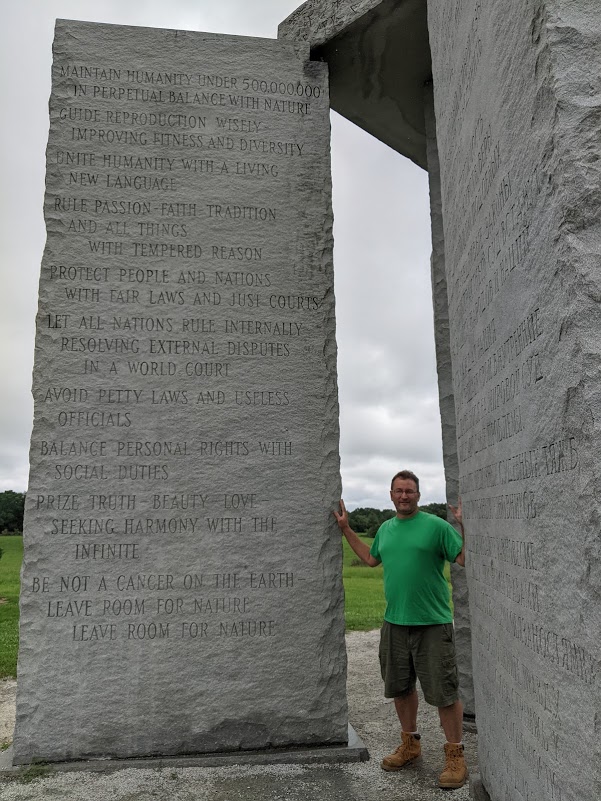 [I was just at the Georgia Guidestones again two weeks ago doing more research, so I’m reminded of the top suggestion to maintain the human population under 500,000,000. It would require killing roughly 15 out of every 16 people to get us below that number as we approach a population of 8,000,000,000.]

“Elites like Bill Gates are famous for it. [population reduction] Is it any wonder that they would devise a plan to institute it? What if, as many experts have suggested, the vaccine side effects create this condition of a diminishing population? What if they are meant to?

….The globalists have set in motion an end game – It could be an end game for us, but it also could be an end game for them. They are on a strict timeline. They must get near 100% vaccination rates in the next couple of years or sooner. They must get their vaccine passports in place in the next couple of years or sooner. And, they must instill permanent lockdown conditions in the near term to stifle growing dissent. We are now in a kind of race in which the globalists must implement their agenda as fast as possible while we must hold out and hold them back until the truth becomes obvious to the masses; the truth that the lockdowns, mandates, and vaccines were never about safety and were always about control – from social control to population control.”

Many agree with Brandon Smith that the “vaccines” may not be about curing a disease, they might be about depopulation. It begs the question, why now? Perhaps the powers that be are setting an end game in motion because the game is ending. Perhaps they are on a strict timeline because they know the end of the present world is coming very soon – they know exactly when the next catastrophe is due. And if those in power now, after their families have been groomed for untold generations to be ready at this time to control the transition to the next world – if they want total control of the aftermath then they don’t want other survivors. They don’t want to emerge from their bunkers someday to face angry challengers who understand that they knew what was coming and didn’t tell the rest of us to give us better chances. I think those in the know want the next world all to themselves. One way to ensure that is to make sure everyone else is injected with an off switch.CHAT/CONTRIBUTE ON TELEGRAM – https://t.me/BeforeitsNewsGroup

Or maybe that’s just crazy talk and it makes perfect sense to cave in to pressure and accept rushed vaccines alter our genetics and have many side effects and don’t offer guaranteed immunity to a disease with a 99.74% survival rate and don’t even allow you to stop wearing a mask even if you take the vaccine two or three times….

2 thoughts on “Why Governments Are Desperate For 100% Vaccination”